One of the more bizarre moments in the recent opening ceremony for the Olympic Games occurred when the spotlight fell on a bloke sitting at a desk in front of a computer. Commentators on certain American television channels were unable to explain who he was or why he was there. However, viewers with a telecoms or IT background might have recognised him as Sir Tim Berners-Lee, the inventor of the World Wide Web.

In the early 1990’s, Berners-Lee was working at the CERN atomic research centre near Geneva. As he later recalled:

“The real world of high-energy physics was one of incompatible networks, disk formats, data formats, and character-encoding schemes, which made any attempt to transfer information between computers generally impossible.”

In order to gain maximum benefit from the results of the hugely expensive experiments being conducted at CERN, there was a need to store and present information in a way that overcame the incompatibilities between different computers. Email was a well established method of passing information from one computer to another, but it did not provide a public space in which information could be immediately presented to anyone who asked for it. Furthermore, email did not provide any mechanism for linking together related pieces of information to guide the user towards data that they were looking for. 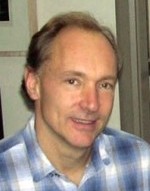 Berners-Lee hit upon the idea of using hypertext to provide these linkages. Hypertext was not a new idea. The index used in a printed book can be considered to be a form of hypertext, and hypertext had already been used to provide cross-references within electronic documents. However, Berners-Lee was the first person to apply the idea to a computer network. Using hypertext, it would be possible to link text in one document to related text in another document – irrespective of where the two documents were stored on the network. As Michael Dertouzos, the Director of the MIT Computer Science Laboratory, subsequently commented:

“Thousands of computer scientists had been staring for two decades at the same two things – hypertext and computer networks. But only Tim conceived of how to put those two elements together to create the Web.”