There’s Nothing that a Wompom Cannot Do!

Flanders and Swann used to sing an amusing song about the Wompom – an imaginary animal / vegetable hybrid with an amazing range of properties. This song, which is still available on iTunes, often comes to mind when I’m reading about the latest “wonder material”:  Graphene.

Graphene was discovered by two researchers at the University of Manchester (Kostya Novoselov and Andre Geim) while attempting to construct a transistor out of graphite. They needed to produce a sheet of graphite that was as thin as possible, and their method was astonishingly simple – they simply suck a flake of graphite on a piece of sticky tape, folded the tape over and them pulled it apart. To their astonishment, they found that this process sometimes produced slivers of graphite that were just one atom thick. Even more amazingly, these films of graphite turned out to be mechanically stable. It was the thinnest material that had ever been produced. As in the case of the Wompom: 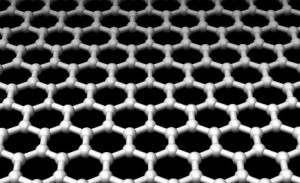 Graphene is harder than diamond and three hundred times stronger than steel, yet it is incredibly flexible and the world’s best conductor of electricity.

Now the thick inner shell of a Wompom
You can mould with a finger and thumb.
Though soft when you began it
It’ll set as hard as granite
And it’s quite as light as aluminium

There is such an extraordinary range of potential uses for grapheme that there isn’t space to list them all here. However, to avoid diverging too far from the theme of this blog, some uses that may have an impact on telecoms include much faster integrated circuits, spray-on solar panels, massively increased battery capacities and lower cost displays that are simpler to recycle.

So we make what we like from the Wompom,
And that proves very useful indeed.
From streets full of houses
To the buttons on your trousers
With a Wompom you have everything you need.

With apologies to my younger readers who may never have heard of Flanders and Swann.