The successful laying of a trans-Atlantic cable was one of the most extraordinary feats of engineering in the history of telecoms. The hero of our story is Cyrus Field, an American businessman who had made his fortune in the New York textile and paper trade. At a time at which existing submarine cables rarely exceeded 100 miles in length, Field was planning a submarine cable 2,000 miles long laid between Ireland and Newfoundland, with an additional 1,000 miles of cable to link Newfoundland with New York City. 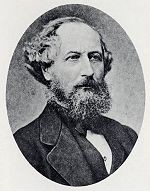 Field joined up with four other New York businessmen to form the grandly named New York, Newfoundland and London Telegraph Company. They decided to start with the “easy” part of the project—the link between Newfoundland and New York City. Although this was mainly an overland route, the difficult terrain and the appalling weather presented considerable difficulties. Furthermore, the first attempt to lay an 85-mile submarine cable across the Cabot Strait was a complete disaster and they had to return for a second (successful) attempt the following year. The Newfoundland to New York City link was finally completed in 1856.

At this point, the company had exhausted its funds, so Field turned to England for additional investment. In October 1856, he created the Atlantic Telegraph Company and started selling stock in London. One of Field’s great strengths was a complete inability to accept defeat. The following list of his attempts to lay a trans-Atlantic cable stands as testimony to his extraordinary persistence:

In 1857, USS Niagara and HMS Agamemnon were each loaded with 1,250 miles of cable and they set sail from Southern Ireland. The plan was that the Niagara would lay its half of the cable first and the Agamemnon would then take over when they reached mid-Atlantic. However, the cable broke after only 440 miles had been laid.

For the second attempt, it was agreed that the Niagara and Agamemnon would both start laying cable in mid-Atlantic and would proceed in opposite directions. However, on their way to the starting point, the ships encountered a massive storm that lasted for 6 days and threatened to capsize both vessels. Despite 45 crew members requiring treatment for injuries, they did eventually manage to start laying cable but it snapped almost immediately. They started again, and this time they managed to lay 80 miles of cable before it snapped. On the third try, the cable snapped after 220 miles had been laid.

On July 28, 1858, Niagara and Agamemnon set sail once again and this time they managed to complete the installation of the cable. However, attempts to communicate over the installed cable were less successful—it was found that the received signal was so weak that over half the words needed to be repeated. In an attempt to rectify the problem, the company’s Chief Engineer increased the voltage. To his consternation, this burnt out the cable’s insulation and rendered it useless. The public rejoicing that had followed the first successful laying of a trans-Atlantic cable was brought to an abrupt and acrimonious end.

After this string of failures, it was decided that the next attempt would have to use a cable that was almost three times heavier. This raised the question of how many ships would be needed to install such a massive cable. The problem came to the attention of the famous engineer, Isambard Kingdom Brunel, who invited Cyrus Field to visit the construction site of the Great Eastern. At 693 feet long, this ship was five times the size of any other vessel afloat when it was completed in 1858, and it was capable of carrying the full length of cable needed to span the Atlantic. However, the first attempt using the Great Eastern met with failure when the cable broke just 600 miles short of the Newfoundland coast. Interestingly, the sudden loss of connectivity in the cable was detected back in Ireland, leading to speculation that the Great Eastern had sunk; there was considerable relief when it eventually returned to port.

In July 1866, the Great Eastern left Ireland for another attempt and Field’s persistence finally paid off—after just 2 weeks, the cable had been successfully installed. Telegraph messages were soon being exchanged across the Atlantic and the link was opened up for commercial traffic. Amazingly, this cable was still in use 100 years later.

Later that summer, the cable that had broken during Attempt No. 4 was successfully repaired and the remaining 600 miles of cable were laid. Within a month of the first trans-Atlantic cable becoming operational, a second cable was also transmitting messages.

It is satisfying to note that this tale of dogged determination had a happy ending. The long sequence of failures caused widespread scepticism about the project, and many investors decided to cut their losses before success was achieved. Western Union, the dominant telegraph operator in the United States, were so convinced that a trans-Atlantic cable would never work that they started building a telegraph link to Europe via Siberia—a route that required only 25 miles of submarine cable to cross the Bering Straits. These plans had to be scrapped when they heard of Field’s success.