The Strange Story of Phone Phreaking

During the 1960’s, the use of analogue signalling tones between telephone exchanges gave rise to a new phenomenon called “Phone Phreaking”. The word “phreak” is apparently a combination of “phone”, “free” and “freak”, so it’s rather a good name.

Phone phreaking seems to have developed independently in a number of different places, but one of the early pioneers was a blind American schoolboy named Joe Engressia. At the age of eight, it is said that Engressia liked to dial non-working telephone numbers just to listen to the recording that said “This number is not in service”. One day, he started whistling a tune while listening to a recorded announcement and was surprised to find that the line suddenly went dead. When he repeated the experiment, the result was the same. Full of curiosity, he rang the local phone company and asked them why this had happened. An engineer explained that the phenomenon was known as “talk-off”, and that it occurred when a 2,600Hz tone occurred by chance during the course of a telephone conversation.

Joe subsequently discovered that he could use this knowledge to obtain free telephone calls. In 1969, while a student at the University of South Florida, he was disciplined by the college after being caught whistling-up free long distance calls for fellow students. His exploits eventually led to him being arrested and prosecuted for “malicious mischief” after he featured prominently in a famous 1971 article on phone phreaking in Esquire magazine.

Joe Engressia had perfect pitch, which meant that he could whistle an accurate 2,600 Hz tone whenever he wanted. However, for the benefit of lesser mortals without perfect pitch (or those who could not whistle), electronic “blue box” tone generators soon started to appear. These boxes were held next to the telephone mouthpiece, and enabled phone phreaks to generate the full range of signalling tones that they needed. It was even discovered that the plastic whistle included as a free gift in packets of Cap’n Crunch breakfast cereal would produce the required 2,600 Hz tone. 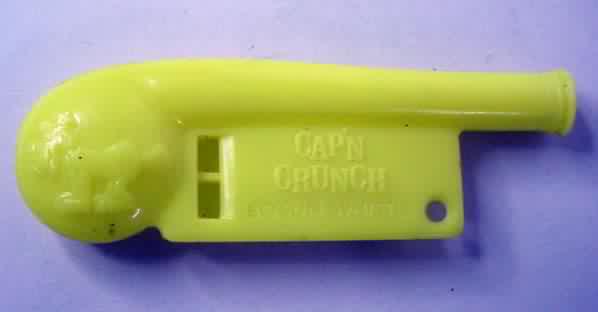 Phone phreaks loved to demonstrate their expertise by setting up complex calls with devious routes. For example, a call might be established between two adjacent telephones with a route that threaded its way around the world, thereby enabling the speaker to listen to the sound of their own voice. Telephone conference calls were organised – free, of course – during which phreaks would exchange information about the inner workings of the telephone system and brag about their latest exploits. Since these activities were illegal, calls of this type were often made from public phone boxes, but the fear of prosecution seems to have done little to deter dedicated phone phreaks. It was only with the introduction of digital telephone exchanges in the 1980’s that phone phreaking finally came to an end.